Looking for some digital out of home advertising examples to inspire your next outdoor ad campaign? We’ve got you covered.

Digital OOH advertising platforms have given businesses of all shapes and sizes new and creative ways to express their messages with innovative outdoor advertising campaigns.

Marketers around the world are quickly realizing the power of digital OOH ads for providing interactive and exciting experiences for customers. With options for granular audience targeting utilizing advanced technologies like facial recognition and data analytics and the digital display power to create immersive, memorable and truly engaging campaigns, it’s no wonder the digital OOH advertising market is growing.

Digital Out of Home Advertising Market

Globally, the DOOH advertising market is projected to reach $21.35 billion by 2030, up from $6.28 billion in 2020, growing by 13.0% annually over the forecast period, according to the latest figures from Research and Markets. 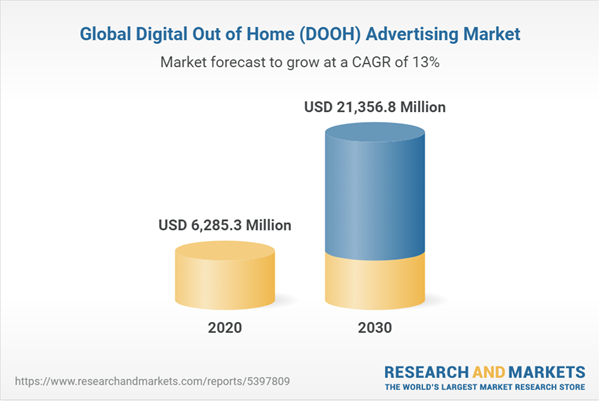 As the report puts it, the projected growth is “owing to the increasing adoption of digital OOH ads in commercial verticals, rapid digitization and urbanization in emerging countries, proliferation of smart cities and growing technological advancements.”

With all that as context, let’s take a look at some fantastically creative examples of digital out of home advertising in the wild.

Digital Out of Home Advertising Examples 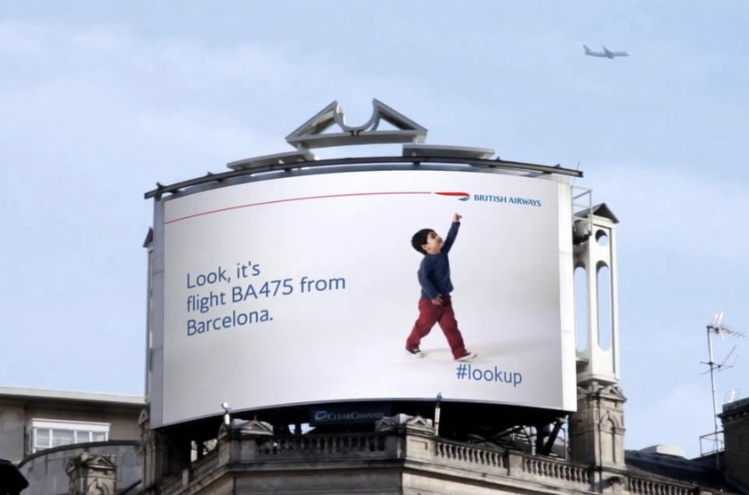 The great thing about DOOH advertising is that, unlike with traditional print-based ads, your creatives can be dynamic and animated. British Airways fully capitalized on this capability with its “LookUp” campaign featuring a toddler pointing up at the airline’s planes flying overhead.

The content adjusted every time a plane flew over – behind the pointing child, the name of the flight and where it took off from appeared.

It’s a fantastic example of how it’s possible to alter an advertisement based on incoming real time data. In this case it’s flight data – though it could be, for example, weather data, pollen count data, or sports result data that act as triggers for what digital ads you display (or how those ads change) at what time of day.

One great example of live weather data being used to trigger different DOOH ads comes from the Aruba Tourism Industry, reminding people in cold winter months across the US that sunny days are within reach.

Targeting winter commuters in Chicago, Philadelphia and New York City, screens throughout the cities featured photos of Aruba’s hot, sunny, paradisical beaches and activities with real time weather feeds that showed just how much warmer it was in Aruba at that very moment.

Each location featured a different creative and tailored message. For example, a screen in NYC read “When the Big Apple Is Frozen to the Core…” and showed New York’s temperature at 32 degrees Fahrenheit next to Aruba’s 84 degrees. Chicago screens, meanwhile, displayed the message “Trade the Windy City for Warm Trade Winds…” 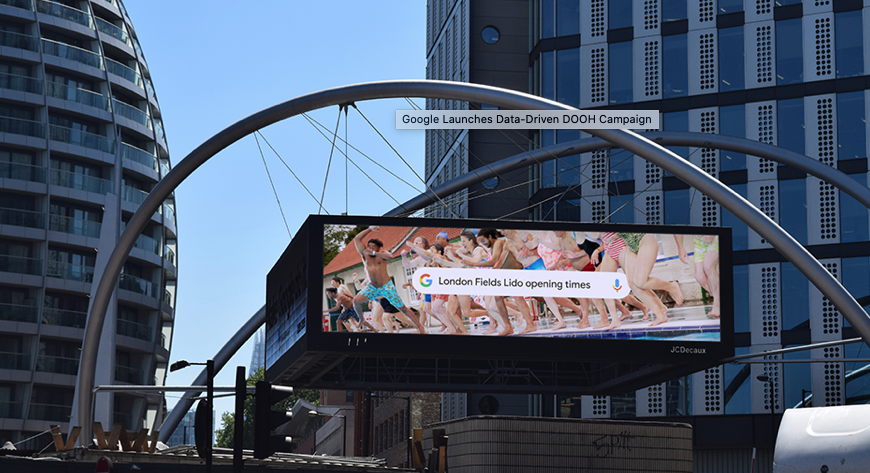 From the cold winters of Chicago to the hot summers of London (as well as Glasgow, Manchester and Birmingham), Google also took advantage of weather data to create a responsive, data-driven ad campaign centered around the British summer.

The “Make the Most of Summer” campaign engaged the public across the UK’s biggest cities with digital displays that featured results for popular locality-based Google search terms, such as “Best ice cream in Glasgow”, “Parks near Shoreditch”, or “London Fields Lido opening times”.

The displays used location-specific, weather, time, day and temperature triggers, as well as cultural event triggers such as The Ashes cricket series to incorporate additional context to the creatives. 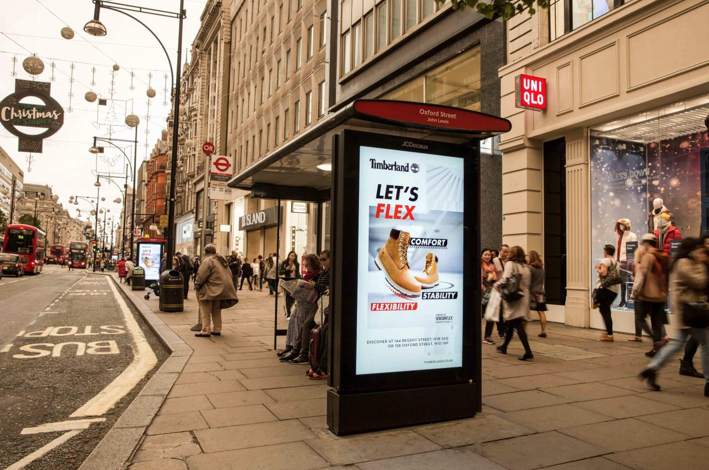 Outdoor clothing brand Timberland has reaped the amazing benefits of digital out of home advertising on numerous occasions. One example is its “Urban Adventures” location-based campaign, designed to encourage people to “get moving” while promoting the brand’s “Sensorflex” comfort system. Screens in London would display the current location, alongside extra information about close-by places of interest, how far away they are, how many steps it would take to get there and how many calories you’d burn walking to them.

Another example is a campaign that promoted Timberland’s new waterproof Radford boot. Using real time weather data as the trigger, creatives displayed on street furniture giving the address of the nearest Timberland store where consumers could purchase a new pair of Radfords. 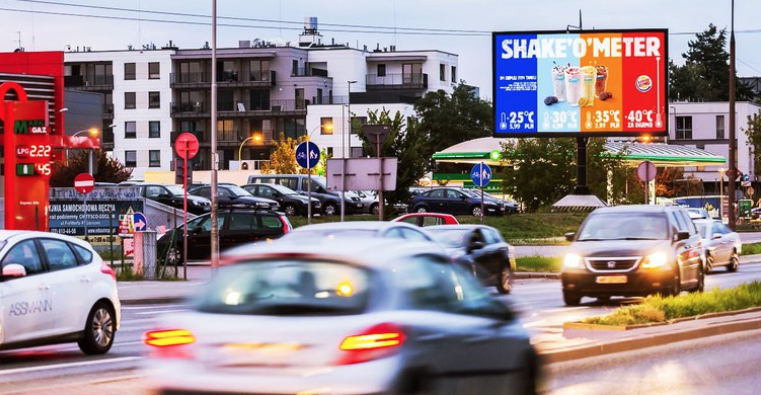 The responsive power of DOOH means that your messages and promotions can adjust in accordance with real-world conditions. Burger King took advantage of this with its “Shake’O’Meter” campaign, which treated consumers to discounted Oreo shakes.

The price of a shake depended on the current air temperature near selected screens in Poland – the higher the temperature, the lower the price, until, when the Shake’O’Meter hit 40 degrees centigrade, they were free. The campaign reached 8 million people, according to figures cited in Digital Signage Today and product awareness increased significantly, with shake sales increasing 13%. 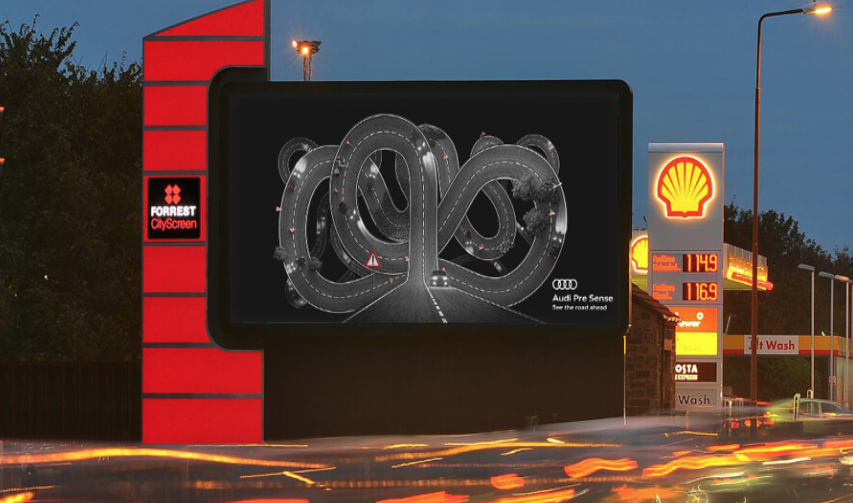 For example, when traffic was heavy, the ad alerted drivers to Audi’s “Pre-Sense” feature. When the weather was bad, the ad changed to feature “Quattro-on-demand” – Audi’s all-wheel drive technology designed to assist drivers in rain, snow, or hail.

Benjamin Braun, former Head of Marketing at Audi UK, commented on the campaign: “This is the first data-driven digital OOH campaign we have launched on a national scale. By using data to contextualize copy, we can reach drivers with targeted and tactical advertising messages that are relevant throughout the day, tapping into the driver’s mindset in the moment. That is powerful.”

Hopefully these fantastic digital out of home advertising examples have given you some inspiration to start creating your own.

To get the most out of DOOH advertising, however, you need a reliable programmatic DOOH (pDOOH) platform to help you reach the right people with the right creative in right place at the right time of day.

Programmatic DOOH is the automated buying, selling and delivery of DOOH advertising. Using a purpose built pDOOH platform like The Neuron, buyers set specific conditions (such as how, when, where, and to whom they want their ads to appear) for how they want to buy media. When those conditions are met, ad space is purchased and delivered automatically.

At The Neuron, we’re committed to making DOOH advertising more accessible than ever before to businesses of all sizes. Our platform lets you connect directly with media owners so you can find the perfect inventory for your campaign, and it provides you with easy-to-use analytics tools to track your success, gain insights, and optimize your efforts on the fly.

Get in touch today to learn more about our cutting edge programmatic DOOH platform. 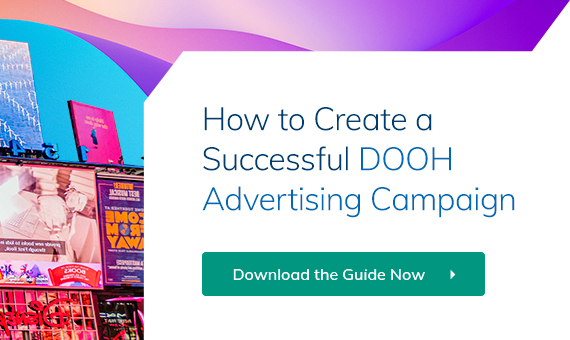