Billboard advertising has been a staple of urban and highway landscapes for decades – and for good reason. Toweringly tall, wide, colorful, and absolutely unmissable, the giant roadside billboard is one of the most effective ways for businesses to raise brand awareness, communicate key messages about products and services, and make a memorable impact with potential customers, all at the same time.

Today, billboard advertising is no longer the preserve of large international brands with equally large budgets. As the number of digital billboards has grown – there are now more than 10,000 across the US – not only is billboard advertising more affordable than ever, but gaining access to premium digital screens is now easier than at any time in the history of outdoor advertising. Even for SMBs.

This is thanks to the new breed of programmatic DOOH (pDOOH) platforms like The Neuron, which make buying billboard ad space as simple and convenient as it is affordable and revolutionary. These platforms not only give SMBs ready access to the best digital OOH space in the country, they also allow brands to hyper-target key audiences and demographics while adjusting creative in the blink of an eye based on real-world events, such as weather forecasts, breaking news and sports results.

Consumers Like, Trust, and Engage with Digital Billboard Ads

A new study by GroupM, Xaxis, and Kinetic, entitled The DOOH Difference, which sought to quantify the appeal of digital outdoor advertising from the consumer perspective, finds that consumers overwhelmingly like, trust, and welcome DOOH in their surroundings. In a survey of over 11,000 consumers, the study revealed that many audiences believe digital billboard advertising enhances their experiences outside the home, prompts interactivity and engagement with advertisers’ messages online and on mobile, and most importantly, increases their propensity to make a purchase.

As Akam Davies, Global Practice Leader for Digital OOH at Xaxis puts it, “[Digital out of home] offers a large creative canvas but also gives ad buyers the precision planning ability and agility of digital, programmatic media, as well as a powerful location-based element that drives a multitude of actions. The survey findings also validate our view that DOOH does not replace existing forms of ad media but adds its own unique and complementary value for marketers.”

Strategically placed along highways and freeways where thousands of cars and buses travel each week, and in town and city centers where tens of thousands of people live, work, and congregate, billboard advertisements are viewed by huge numbers of drivers, commuters, cyclists and pedestrians every single day.

This makes digital billboards a hugely powerful medium for raising brand awareness and getting your message out to mass audiences. Whereas people can easily ignore or block an online ad, or change the TV channel away from a commercial, large digital billboard display are fundamentally un-blockable in whichever environment they are placed. Research shows that 71% of Americans consciously look at billboard ads while driving – and 56% say they have mentioned a billboard they found funny or interesting later in conversation. In short, billboard advertising gets noticed and often has a lasting, memorable effect on audiences.

2. You Can Match Locations to Audiences and Markets

As mentioned, there are now thousands of digital OOH billboards to be found in key locations around the country. Whether it’s by a busy intersection, a freeway exit, or right in the middle of town, you can hand select a location where the traffic includes a large percentage of your target market.

Today, this is easier than ever, thanks to the power of programmatic DOOH platforms like The Neuron. Using GDPR compliant anonymized mobile location data (plus data from other sources), pDOOH platforms build a picture of where different demographics spend their time throughout the days, weeks, and months. This means you can select digital billboards to run your ads at precise moments in pinpoint locations where your target audience is most likely to dwell.

Read more: How to Use Digital Billboard Advertising to Target Your Audience

Unlike traditional static billboards which incur high costs to run a single, unchanging advertisement for weeks and weeks on end, digital billboards display many different messages that rotate frequently throughout the day.

Not only does this keep costs down for advertisers, but because advertising slots are bought programmatically via automated bidding platforms, the process of securing premium advertising space is much less resource intensive.

SMBs typically have very small marketing departments or they are reliant entirely on agencies, which limits the time they can spend on finding the right inventory to advertise on, not to mention the subsequent process of negotiating with media owners over pricing. Thankfully with a pDOOH platform like The Neuron, they don’t have to. All an SMB needs to do is log onto the platform, upload their creative, pick a DOOH screen and then set their criteria for running the ad, including:

Once setup, the pDOOH platform automatically bids for ad space on your selected digital billboards to meet your specified criteria and engage your target audience. As a result, digital billboard space is much more accessible to smaller businesses with more modest budgets and fewer resources.

Finally, one of the most important advantages of buying digital billboard advertising through a programmatic platform is real-time reporting and analytics.

When you can’t measure the performance of your campaigns, your ability to improve them becomes severely limited indeed. This is one of the major, fundamental challenges with traditional forms of outdoor advertising.

With pDOOH platforms on the other hand, you can measure the effectiveness of each of your campaigns quickly and easily via a simple and intuitive dashboard that gives you the following metrics:

This way you can see what’s working and what isn’t, and then easily adjust your creative or campaign criteria to instantaneously optimise your ads.

Get Started with Digital Billboard Advertising Today with The Neuron

Today, it couldn’t be simpler for SMBs to make their presence known on digital billboards. All they need to do is select the right programmatic digital out of home platform to connect them to a huge range of premium screens in a few simple clicks.

The Neuron is the platform you’ve been looking for. With automated bidding, single-click processes, and a comprehensive range of campaign analytics, The Neuron will help your brand stand out in the billboard advertising world. 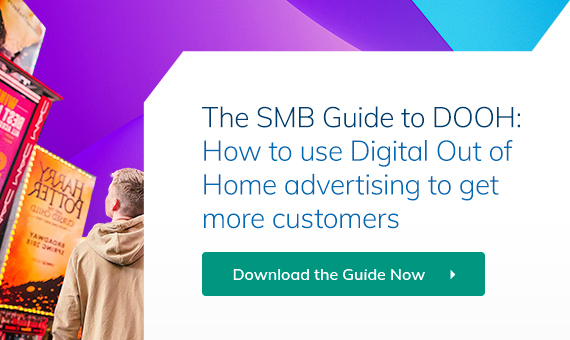