Static Billboards vs Digital Billboards: Which Is Right for You?

Out of home (OOH) or outdoor advertising is one of the most effective forms of advertising available to businesses today. Including any type of advertising that reaches consumers outside of the home – posters, vehicle wraps, street furniture, billboards, etc. – OOH advertising is a fantastic, high-impact medium for reaching your target audience and raising brand awareness.

More and more businesses are capitalizing on the power and reach of outdoor advertising – which is why investment in this channel is increasing rapidly. 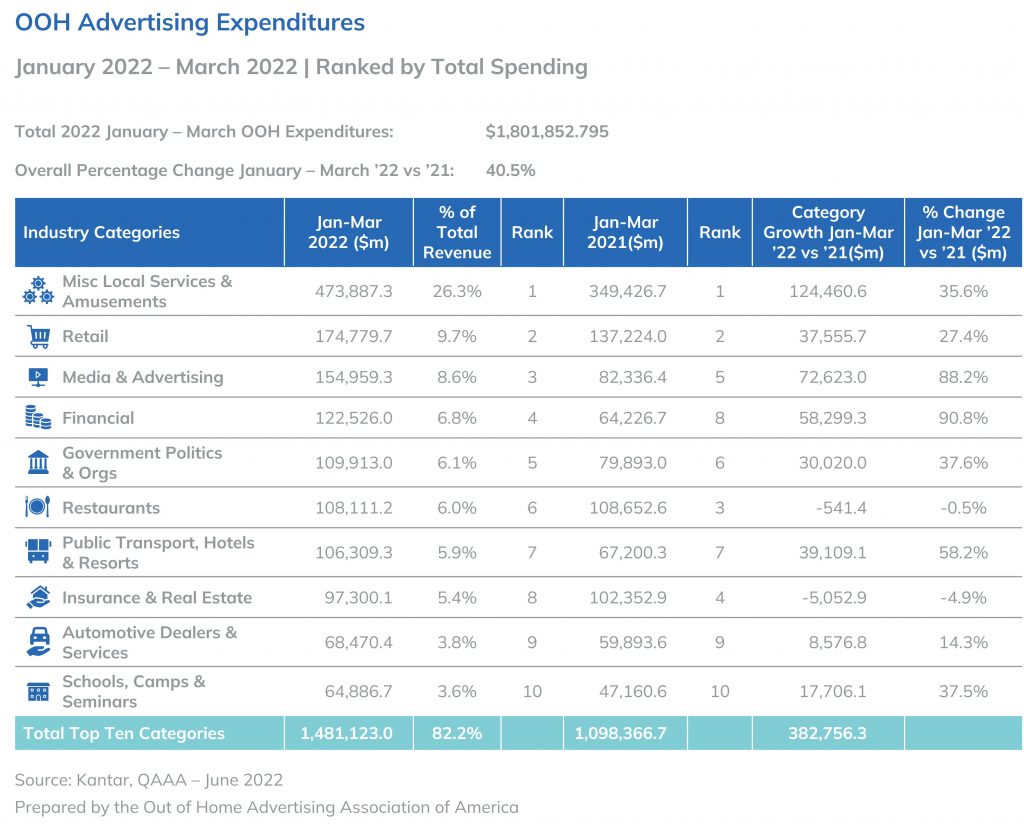 Commenting on the findings, Anna Bager, President and CEO of the OAAA, said: “Out of home advertising is poised to take a greater share of budgets as advertisers increasingly recognize its critical role in the marketing mix. These first quarter figures show that OOH is already outpacing the same period in 2019, and we are on track to reach or exceed pre-pandemic spend in 2022.”

The research also reveals that the most common form of out of home advertising is the billboard, which makes up nearly 75% of total OOH revenue. 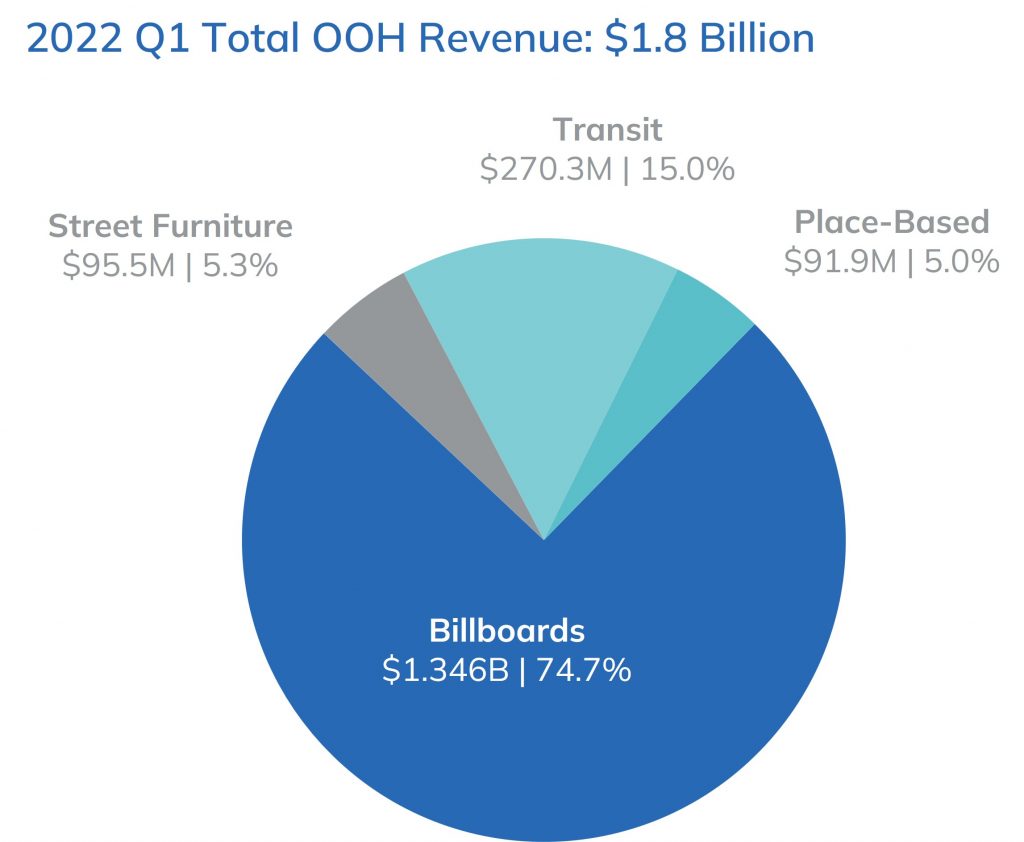 As one of the oldest and most enduring forms of advertising, it’s hardly surprising that billboards account for the largest share of the OOH advertising landscape – today, there are over 350,000 billboards across the US, according to data from Statista.

There are two main types of billboard – static billboards (also known as traditional billboards), and digital billboards. The question is – which one is right for your business?

Knowing the differences between traditional billboards and digital billboards, and how they each can be used to reach your target audience, is key to answering this question and maximizing your ROI.

So, let’s consider the key features of static billboards and digital billboards individually.

Static billboards have been utilized by many thousands of businesses primarily to create and raise brand awareness, for well over a century. They are more usually located along highways, freeways, and at busy road intersections – static billboard advertising mostly aims to reach commuters who pass the boards every day.

One of the perceived advantages of static billboards is the fact that they are, indeed, static in nature. This means that advertisements remain on them for weeks or even months at a time. Businesses don’t have to share the space with any other advertisers and the ad can be seen by anyone who passes it 24 hours a day, 7 days a week, for as long as it is on display.

However, the disadvantage of static billboards in comparison to digital billboards is that the advertisements can fade over time due to exposure to the elements. More besides, the ad may get damaged, ripped, torn, or vandalized. This reduces the overall visual impact and, as the ad starts to fade and suffer from wear and tear over time, the perception of the brand being advertised can be tarnished by association.

Another disadvantage with traditional static billboards is the production costs associated with printing the creative. If you wish to change the advertisement, even slightly, every few weeks or months, it will add significant additional cost due to re-printing the creative. Further to this, publishers require that any artwork is submitted with a lead time for printing, which is typically at least two weeks before the ad plays. This makes static, printed billboards highly inflexible and costly, should you want to react to changing events, or simply update the creative.

In addition, the very fact that static billboards often remain unchanged for weeks or even months on end means that consumers may experience ad fatigue. As a result of seeing the same ad repeatedly over a long period, the target audience may lose interest and stop noticing the ad altogether as they become used to seeing it.

Further, due to the offline nature of static billboard ads, it isn’t possible to provide the same metrics and analytical capabilities as digital billboards to measure impressions and success. With traditional billboards, it is much more difficult for advertisers to test their ads and make quick adjustments once an ad is printed and pinned up, in comparison to digital advertisements which can be rapidly adjusted and optimised with just a few clicks.

Digital billboards or LED billboards are big, bright, electronic displays, controlled remotely using computers via a digital network connection. Like static billboards, digital billboards can be found on roadsides next to highways and freeways, however, they are also found in busy city and town centers, often as spectacular wall displays like in Times Square, New York, or Piccadilly Circus, London. 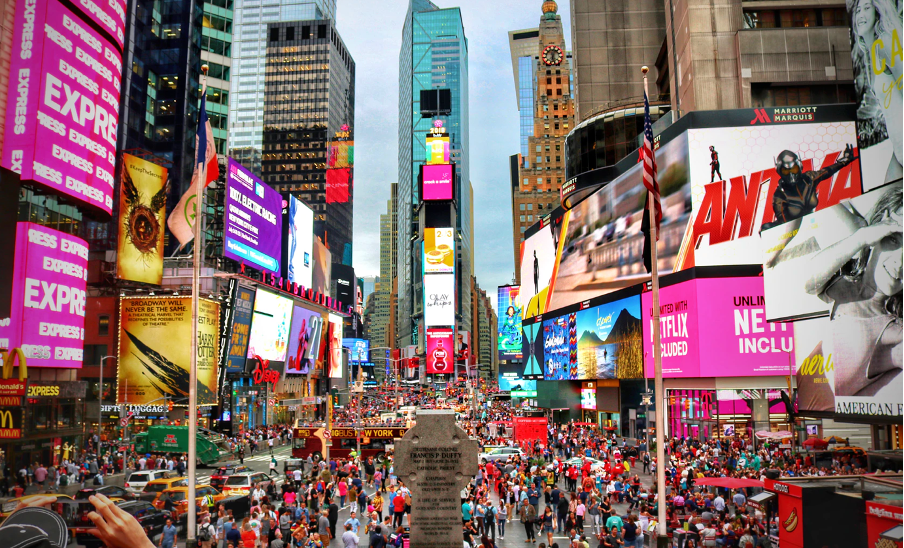 One huge advantage of digital billboards is that they offer much more flexibility to the advertiser. Digital Out of Home ads allow businesses to update and change messages instantly, run multiple different messages over the course of a day (or week, month, season, etc.) and test the effectiveness of their ads much more easily.

This is because anonymized mobile location data feeds directly into today’s powerful programmatic DOOH (pDOOH) platforms to allow for more intelligent purchases of ad space on digital billboards. Using this data, advertisers can see at a glance not only how many people are walking or driving past their ad, but also anonymized demographical information about who those people are.

What’s more, location tracking services can also determine how many people walked or drove past the digital billboard ad, went on to visit a brick-and-mortar store. In this way, advertisers can understand which billboard locations yield the best results for their customer groups, and thereby optimize their campaigns for the greatest ROI.

Further benefits of digital billboards include the ability to be reactive to external factors, such as traffic conditions, weather conditions, temperature, and even live news events or sports results. Harnessing the power of programmatic DOOH, advertisers can introduce contextual relevancy to their billboard ads. For example, a department store retailer might advertise indoor DIY goods when it’s raining and then pivot to garden furniture or barbecues when the sun shines. Similarly, a fast-food restaurant can advertise hot drinks when the temperature drops or ice creams when the weather turns hotter – all at the click of a button.

Read more: Contextual Advertising: What Is It and Is It Right for You?

Aside from being highly customizable, digital billboards also offer a better visual experience for consumers. Ads on an LED billboard don’t fade, can’t be ripped or torn, and advertisers aren’t limited to static images since digital displays allow for dynamic creative with high definition video and animation.

It’s for these reasons that digital billboards have a huge recall rate of 83% and capture a massive 400% more views than static displays.

Get Started with Digital Billboard Advertising Today with The Neuron

The Neuron gives you instant access to premium digital billboard advertising inventory and is specially designed for SMBs. With single click processes, automated bidding, and powerful reporting and analytics, with The Neuron you can get your digital billboard campaigns up and running in a matter of minutes and start seeing meaningful returns. 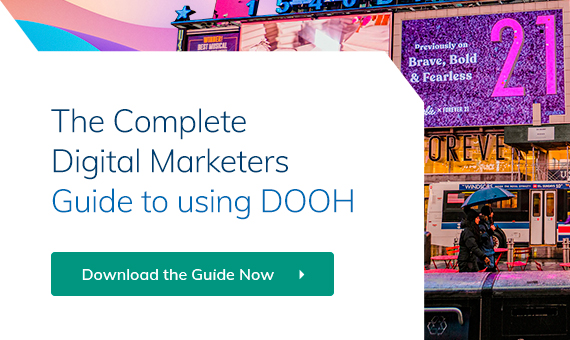